Home » I discover » My essentials » Discover Villeneuve-sur-Yonne, a town of character !

Today, Villeneuve-sur-Yonne stretches well beyond its walls, but as soon as you go through one of its fortified gates, the tone is set and you will be immediately immersed in the atmosphere: Villeneuve-sur-Yonne is a little gem. This impression is confirmed as you cross the centre of the town from one gate to another: many things will attract your attention!

Before you begin exploring the town, return a short while to the 12th century. Villeneuve’s history is one of loyalty to the French Crown. The people of Villeneuve owe the founding of their town, in 1163, to Louis VII (the great-grandfather of Saint Louis). At that time, it was known as Villeneuve-le-Roi and was conceived as an outpost of its big sister, Sens, and the Kingdom of France against the powerful County of Champagne.

Through its particularly favourable legal status, the town quickly saw its population grow and its physiognomy take shape over a period of 50 years or so.

Saint Nicholas Bridge, one of the first structures to be built, was completed in 1186. It transformed the small town, opening up a strategic axis of communication between Gâtinais and Champagne.

During this period, the town was built and surrounded by a thick wall two kilometres long and ten metres high, with five fortified gates.

The free sound and light show, every Saturday night on Summer

The two gates that remain of these ancient fortifications can still be admired today: Porte de Sens to the north and Porte de Joigny to the south. The latter is now a museum.

Don’t look for the royal palace, as it was destroyed in 1820… However, the royal keep is still visible, (you can’t really miss it). It is known as the “grosse tour” (Big Tower). Since the late Middle Ages, this tower has fuelled many legends and beliefs, each one more terrifying than the last.

Look up a little to admire the Church of Notre Dame de l’Assomption. It is nearly as big as a cathedral! Its construction began at the same time as the bridge, to become the highest point of the town. It was not completed until the 16th century, when a magnificent Renaissance entrance was added. As you enter, you will be struck by the building’s brightness. The central nave has 23 windows, reflecting the boldness of its architects. Unfortunately, only four of these windows retain their 13th-century panes.

One of the church’s chapels reminds us that river trade played a prominent role in the development of Villeneuve-sur-Yonne from the 15th century onwards. Indeed, this chapel is dedicated to Saint Nicholas, as indicated by its decor of sculpted anchors, oars and boats, as well as its 16th-century stained glass window which retraces the life of this patron saint of bargemen. Villeneuve-sur-Yonne is not only appreciated for its history and rich heritage. The banks of the Yonne also contribute to its charm. You can enjoy a stroll along the quays where pleasure boats have replaced the tow barges, or admire the view from Saint Nicholas Bridge before going down to the tip of the Ile d’Amour (Island of Love) to take a photo.

Opposite the island, on the left bank, a few steps from the campsite, you will see a bank of sand: Villeneuve-sur-Yonne’s beach is one of only a few supervised bathing areas in the Yonne département and the only one in the Sénonais In a nutshell, in summer it’s the perfect place to cool off and do a bit of sunbathing while taking in the view of the town, including the Bonneville Tower just across the river. Children look forward all year to when the beach will open…

Just along from the beach is the outdoor activity centre, which makes the most of the breeze on the river to put wind in the sails. Villeneuve-sur-Yonne’s sailing club offers introductory sessions and lessons during the summer.

Our tips and practical information 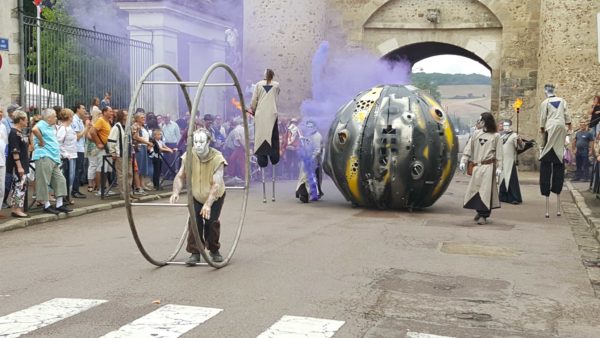 Every year on the 15th August, the town centre of Villeneuve-sur-Yonne is transformed into a...

A romantic outing in Villeneuve-sur-Yonne

Villeneuve-sur-Yonne is known as “the lover’s city” thanks to its history, charming heritage sites and...

The tourist offices of Sens and Villeneuve-sur-Yonne are open at usual opening hours !

Please note, the health pass will be required to access the tourist office of Villeneuve-sur-Yonne.

To welcome you in the best and safest conditions, we have put in place some measures. Among them, you must wear a face covering and wash your hands with the sanitiser station at your disposal. Read more about our safety measures on this page.